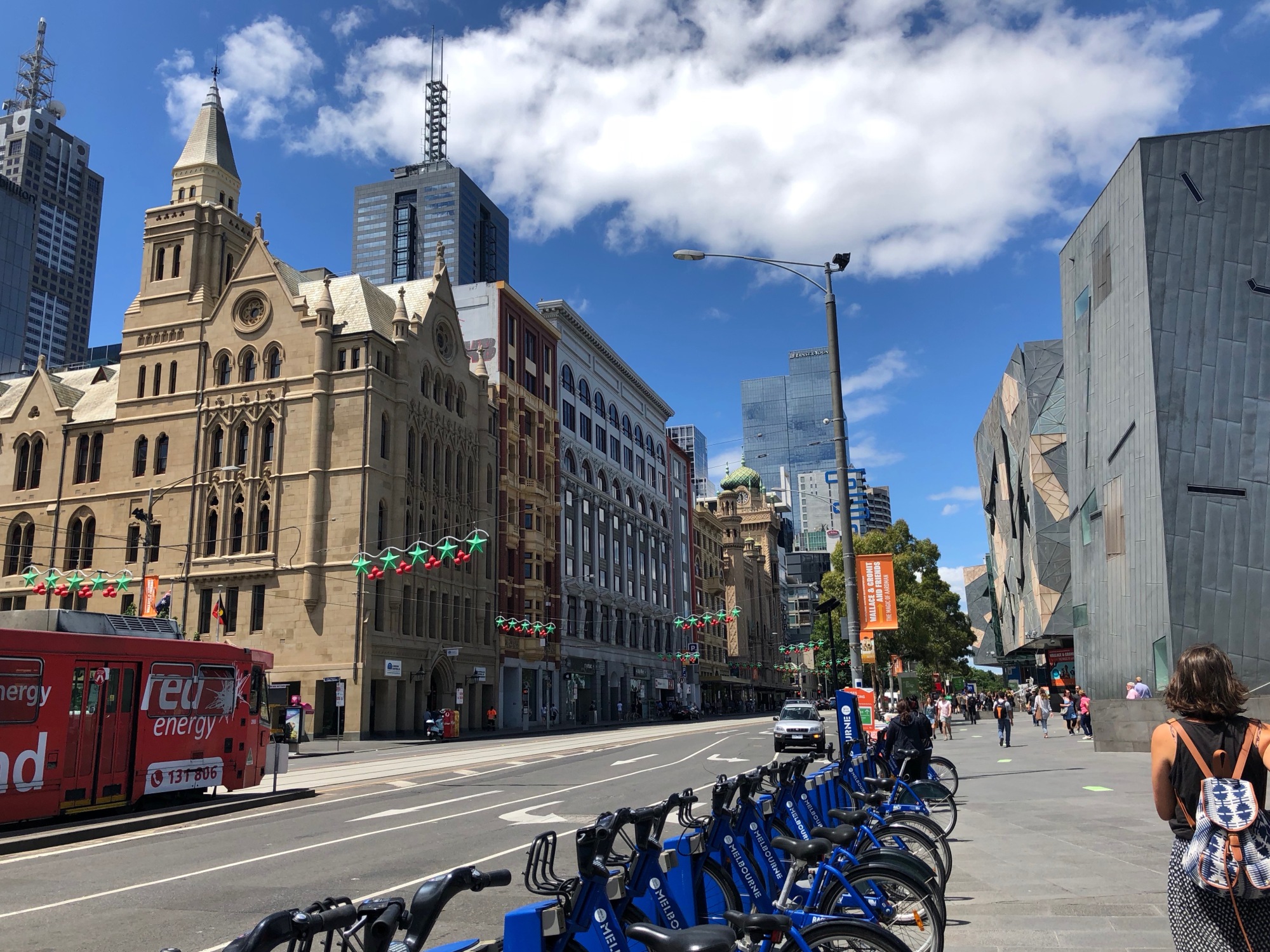 Melbourne (Mel-bon, as the Aussies say) is much smaller than Sydney but definitely worth checking out and I’m so glad I got to experience it.

The ease of the airports in Australia

It’s the little differences that really stand out when you’re traveling abroad.

Domestic travel in Australia is the a traveler’s dream come true. Because the island is so expansive, Aussies treat domestic air travel like a simple bus or train ride.

I breezed through the airport in Sydney, without even whipping out my ID or passport. At airport security, you can keep your shoes on and bring in beverages (including my beloved flat whites), as long as it’s obvious you just purchased it from inside the airport.

The whole airport vibe is extremely relaxed and so pleasant.

When will this pleasant domestic experience be replicated, stateside?

I arrived early for my flight so I could work a bit, but noticed most passengers didn’t show up until about 10 minutes before the flight. It was definitely a relaxed atmosphere that didn’t involve nervous loitering around the gate, trying to inch your way into the plane, before your group was called. (Anxious American travelers, I’m talking to you.)

Passenger boarding groups were also almost non-existent. Of course the elite-gold-star-platinum-first-class-most-awesome passengers boarded first, but after that, they just welcomed everyone.

And the best part — they boarded (and exited) from two entrances. Front half of the plane boarded from the front door, the rest, from the back. This drastically sped up the boarding process. So organized and efficient.

Melbourne is a sort of a big-ish city

The only way out of the airport in Melbourne is the Skybus, which is $19 AUS one way. It drops you off at the CBD.

From the CBD, it was tram city all the way, baby. Melbourne has one of the most robust trams systems in the world. They’re everywhere. I never waited for more than a few minutes each time I went somewhere.

Trams are clean, never too crowded, and basically one of the most awesome things about Melbourne. You seriously do not need a car if you live there.

The only part about transportation that was sort of a bummer was that I couldn’t use my Opal card that I bought in Sydney. I guess it makes sense. It would be like trying to use a metro card from L.A. in SF.

You can go into any 7-11 and buy a Myki card, which is their version of the Opal card. It’s a tag on and off card. The card itself costs $6.

Again, I overshot it with the Myki and put too much money on it ($30). I didn’t anticipate that more than half the time I took the tram, it would be free.

The area called The Free Tram Zone, sits in the central section of Melbourne. You don’t even need to tag on and off when you’re in the free zone. However, once the tram goes outside of the free zone, the honor system kicks in and you’re expected to tag on before you reach your destination.

There’s even a free tourist tram that is specifically designed to go in a circle around the city, but it was too crowded when I took it. I couldn’t even see out the window. But it’s a nice way to get around town, since it takes you to the all of the tourist spots within Melbourne. 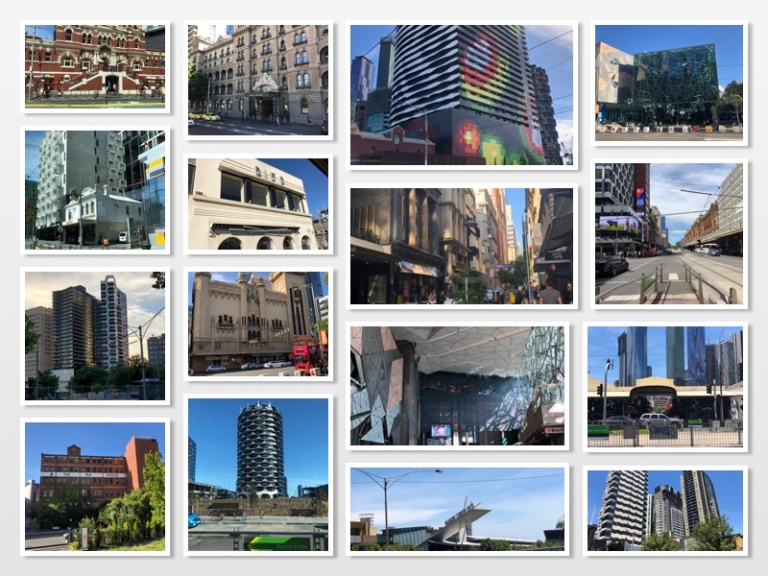 Melbourne is so different than Sydney. I really loved the buildings there.

My time in Melbourne was spent mostly seeing the city and riding on the trams.

I  knew I did a good job covering the city when I took the hop on and off bus on my last day and had already been to almost the stops on the ride, with the exception of a few of the beaches and Luna Park.

I went to both, but liked the South Melbourne Market better, as it was recommended to me by Christian, my Airbnb host.

South Melbourne Market was less touristy and didn’t have the cheesy souvenirs and trinkets that I avoid like the plague.

I bought some fruit, salad and chocolate while I was there, and then walked down to St. Kilda Beach.

So, did I mention art galleries and museums are free?

The first gallery I strolled through was the NGV, which featured an exhibition by Kusama and a giant skull exhibition by an Australian artist.

There was a small gallery inside of the city’s library — mostly of historic Australians who had their portraits painted.

Melbourne has an alley in the CBD that’s filled with graffiti. 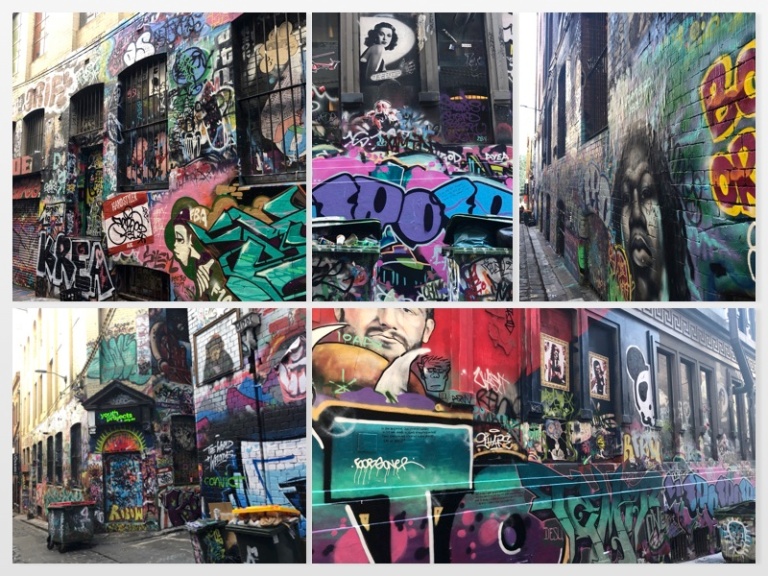